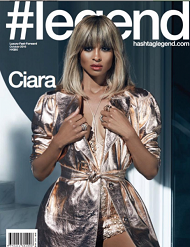 R&B/Pop singer turned style icon and fashion model Ciara covers the October 2016 issue of Legend magazine. For this issue, the “I Bet” singer was photographed by photographer Dennis Leupold, with hair by Cesar Ramirez and makeup done by Yolonda Frederick. Creative direction and styling was courtesy of Paris Libby.

In the editorial, Cici styles in a cape by Naeem Khan, coat by Lanvin, bodysuit by Oscar Carvallo, shoes by Giuseppe Zanotti, dress by Serkan Cura Couture, boots by Saint Laurent, outfit by Balmain, tuxedo dress by Versace, gladiator leggings by Yvy, shoes by Jimmy Choo and more.

Musically, Ciara has sold more than 23 million records and 16 million singles. As far as fashion, she featured in glossy publications around the world on a daily, and is a regular in the front row at Fashion Week in Paris, London, Milan and New York. Last spring, she signed an exclusive modeling contract with IMG Models (see it here).

Cici is a muse of the Roberto Cavalli’s creative director (Peter Dundas). He recently designed her wedding dress (see it here). Last year, donbleek.com reported that Cici was the face of Roberto Cavalli’s Fall/Winter 2015/16 Campaign, was the first American ambassador to Topshop (see it here), and was in the latest campaign for Keds (see it here). She’s also a long-time muse for Givenchy, cultivating close friendships with designer Riccardo Tisci, as well as with Ralph Lauren.

Inside her interview with Legend, Cici talks about Milan Fashion Week, signing with IMG Models, the models who inspired her, her friendship with Peter Dundas, going into fashion design, working with Keds, her forthcoming LP, motherhood and much more. Below and on the next few pages are some excerpts:

You were in Milan for Fashion Week. How was it?

It was really fun. I attended the Roberto Cavalli show to support my friend Peter Dundas, and it was so amazing. I felt like he really locked this season. He’s such a brilliant mind and he’s great. The environment, the atmosphere was amazing, and the fashion was awesome and inspiring. It was an amazing experience all around. We also had perfect weather. Everything was just perfect.