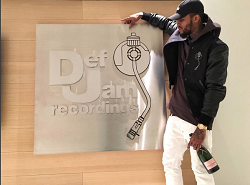 This is just in!

Major congrats goes out to Harlem‘s Dave East. The Bajan and Dominican rapper just signed with Def Jam Recordings. East was previously with Nas’ label Mass Appeal, but says the move is a joint deal that will allow him to expand his audience.

“Mass Appeal is still the family, but I actually just did a joint venture with Def Jam,” he said. “I am very excited about it.” He added of the deal, “It wasn’t just the average [deal of] me signing to a major — I’m actually partners with [Def Jam]. It was just a step forward for me. I was with Mass Appeal solely for almost two years.”

East‘s mentor Nas played a role in his new deal and he will also executive produce his Def Jam debut album: “Nas really introduced the world to me. So that was ideal as far as me first coming in. It’s at a time now where a machine really helps what I’m trying to do, especially being from New York and not trying to stay in New York. Like I told y’all before, I’m not trying to be underground or classified as a certain type of dude. I feel like this was a good move to really get what I’m trying to do, my brand, my movement, across the world.”

Karen Civil, who has worked on the digital front for artists such as Nipsey Hussle, Jeezy and Lil Wayne, will handle the social media and marketing initiatives for Dave East through the Marathon Agency.

The East Harlem -native will release his final independent project under Mass Appeal, Kairi Chanel (the project is named after his new born daughter) on September 30. You could pre-order the project now on iTunes. On the 15-track project, the lyrical rapper gets assist from Fabolous, Cam’ron, 2 Chainz, The Game, Sevyn Streeter, Beanie Sigel, and Jazzy Jamra.

“[Kairi Chanel] I feel is my best work to date. I named it after my daughter, because she’s the greatest and most defining moment of my life,’ East shared with Billboard. “Everything I’ve done up until now has led me to her, so I translated that into music,” he added.

Congrats again Dave East! Welcome to the music industry, give it all you have and take your talents pass the stars.