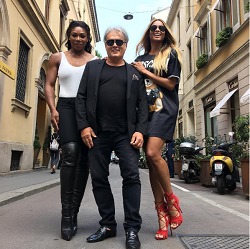 This time around, we spied Cici in the streets of Italy, doing an impromptu photoshoot with tennis superstar Serena Williams and shoe designer Giuseppe Zanotti. She had on an $,1,195  Moschino Oversized Printed Tee-Shirt Dress with a pair of Giuseppe Zanotti Sandals.

The style icon was also photo’d arriving at the cocktail party for the reopening of the Roberto Cavalli flagship store on Via Montenapoleone in Milan with creative director Peter Dundas. She was draped in a 70s inspired dress and boots from the luxury brand.