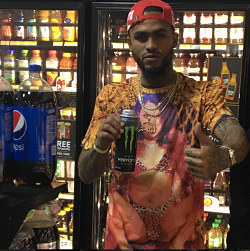 After already securing a bag from Sony Records, Dave East just signed an endorsement with Monster Energy. Exact terms of the deal aren’t available yet. Stay tuned to donbleek.com as this story develops.

The East Harlem -native, who is of Bajan and Dominican descent will release his new LP, Kairi Chanel (the project is named after his new born daughter) on September 30 via Mass Appeal Records. You could pre-order the project now on iTunes. On the 15-track project, the lyrical rapper gets assist from Fabolous, Cam’ron, 2 Chainz, The Game, Sevyn Streeter, Beanie Sigel, and Jazzy Jamra.

Mass Appeal is distributed through RED Distribution, which is owned by Sony Music Entertainment.

“[Kairi Chanel] I feel is my best work to date. I named it after my daughter, because she’s the greatest and most defining moment of my life,’ East shared with Billboard. “Everything I’ve done up until now has led me to her, so I translated that into music,” he added.

East‘s mentor and label boss, Nas isn’t confirmed to be on his upcoming project, but there’s still hope for another collaborative between the two artists like their 2015 offering “Forbes List“.

When asked about the possibility of working with the legendary Queens rapper for his forthcoming twelfth studio album — of which East simply says, “It’s fire” — he hints with a laugh, “I might be on it.”