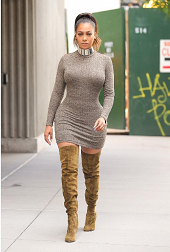 Media personality turned actress and entrepreneuress Lala Anthony is keeping herself busy in the Hollywood world. Last July, donbleek.com reported that the Brooklyn-native and award-winning music producer Timbaland are teaming up with Leftfield Pictures (Pawn Stars) to develop a Hip-Hop docuseries. The project will focus on Jeff Janvier and Session Cruz’s Face Time Agency, the industry’s premiere casting agency for booking music video and hip-hop fashion models, with clients including Drake, Kanye West and Robin Thicke (see it here). She also joined the producing team of Eclipsed, the drama that marked Oscar winner Lupita Nyong’o debut (see it here). Last fall, Anthony joined the cast of Unforgettable, as a medical examiner (see it here).

Anthony just nabbed another Hollywood gig: Her debut book, The Love Playbook: Rules for Love, Sex, and Happiness is being turned into a movie. Queen Latifah’s Flavor Unit Entertainment and Codeblack Films are partnering to co-produce and co-finance the film, along with other projects.

The book was published in 2014 and became a New York Times bestseller. Lala gave relationship advice in the book which was co-authored by Karen Hunter and released by Penguin Group’s publisher Celebra.

Anthony will also executive produce for the project through her LaLa Land company. Amy Aniobi (“Silicon Valley”) is writing the screenplay.

The slate will be co-produced by Flavor Unit Entertainment’s Shakim Compere and Queen Latifah. Quincy Newell and Jeff Clanagan will also serve as producers on the projects.

Codeblack Films and Flavor Unit Entertainment will collaborate on the marketing of the films under the slate.

Codeblack Films, a division of Lionsgate, has a mission to serve the global black community through movies targeted to the underserved African-American consumer.

Lala Anthony is is repped by UTA and Untitled.