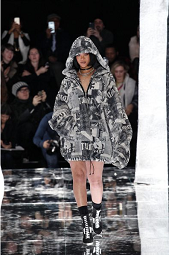 The beginning of this month, donbleek.com reported that “Rihanna is rumored to be eyeing the City of Lights for her next collection. It’s reported that Riri will show her second installment during Paris Fashion Week this September. ” The Fenty x Puma By Rihanna Collection did not show at New York Fashion Week, despite NYC being the city of choice for the debut collection back in February” (see it here).

Despite not showing in New York, the Bajan-beauty hosted her Fenty x Puma By Rihanna Collection pop-up shop at Bergdorf Goodman and Six:02.

We could now officially confirm that Riri is headed to the French capital. The show will be stream live from Paris, where the Roc Nation singer has schedule two evening presentations on September 28 at 7:30 and 8:30 p.m. CET.

“It’s a dream for me to be able to present my second collection of Fenty Puma by Rihanna in Paris,” said the singer, who is creative director of Puma. “I approached this season very differently and felt the theme and concept was best suited for one of my favorite cities, Paris.”

“The collection is to be presented to buyers, press, influencers and the world in a unique, intimate and very different way befitting of the collection’s direction, style and its namesake creative director,” Fenty Puma said in a statement.

Tidal will live stream the presentations to members and non-members, along with interviews and behind-the-scenes content.

According to WWD, “The first full Fenty Puma collection was shipped earlier this month, while the spring collection is slated to arrive in stores and include footwear, apparel and accessories for both women and men. Rihanna is the German athletic company’s highest-profile collaborator. Puma, controlled by Kering, signed her to a three-year contract at the end of 2014.”