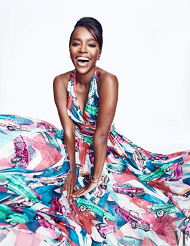 American actress Aja Naomi is featured in the October 2016 issue of Vanity Fair.

She wears a dresses by Michael Kors Collection, Chanel and Prada. Inside she talks about being a child performer, going to an ivy league college, working with Shonda Rhimes and much more. Below are some excerpts.

ALL EYES ON ME: “I’ve been performing since I was a child; my mother would have to pull me aside and tell me that I wasn’t onstage,” she said in our July interview. “I was a cheerleader, president of choir, and in the school play.”

IVY LEAGUE: Aja earned a master’s from the Yale School of Drama. “It was the best three years of my life. I will treasure it forever.”

SHONDALAND: After a string of independent films and canceled TV series, Aja struck gold as driven law student Michaela Pratt in Shonda Rhimes’s How to Get Away with Murder, opposite Viola Davis. “I love these women for creating an environment where we can all be free, engaged, and not worry about being perfect.”

HISTORY IN THE MAKING: This month, Aja’s heart-wrenching performance as Cherry in Nate Parker’s film The Birth of a Nation brings Nat Turner’s 1831 slave rebellion to life. “I was standing on top of an auction block on my very first day—it made me superbly grateful to be living in our time.”

RULE BREAKER: The film nabbed the Grand Jury Prize at Sundance and broke records with its $17.5 million sale to Fox Searchlight. “Nate went beyond what your average person in this industry can ever dream of achieving. We’ll all be able to look back and say, ‘We did that.’ We’re starting a conversation.”

OSCAR’S GIRL: “I’m going to take it as it comes. For now, it fills me with joy to make my parents proud