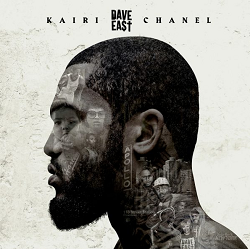 Harlem‘s own Dave East will release his new LP, Kairi Chanel (the project is named after East‘s new born daughter) on September 30 via Mass Appeal Records. You could pre-order the project now on iTunes. On the 15-track project, the New York rapper gets assist from Fabolous, Cam’ron, 2 Chainz, The Game, Sevyn Streeter, Beanie Sigel, and Jazzy Jamra.

Nas‘ protégé just dropped the visual to “Keisha” and he has a story to tell. Here’s how the story starts: East and his homies are sitting on the park bench, he recounts a Hennessy-fueled night, where a girl he meets named “Keisha” catches him slipping. The ending: after his club appearance, East made a stop to buy some condoms, met “Keisha” in her hotel room, had sexual intercourse with her, and then he passed out from the Hennessy after having sex with her, and that’s when she robbed him of $15,000, his jewelry, and phone and then left, while East was still sleeping. When he woke up, East realized that he was robbed.