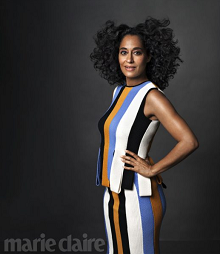 Actress and Hollywood superstar Tracee Ellis Ross is featured in the October 2016 issue of Marie Claire.

Photographer Henry Leutwyler photographed the shoot. Inside, she speaks about growing up in a famous family, her acting career, beauty issues and much more. Below are some excerpts:

On TV these days, working moms are in startlingly short supply—one more reason why Black-ish,ABC’s sitcom about an upper-middle-class black family, is easily one of the most important (and funny!) shows on the small screen today, tackling not just all-too-relevant conversations about race, but also about feminism, class, and careers. We caught up with Tracee Ellis Ross, whose take on matriarch and physician Rainbow “Bow” Johnson, with its shades of modern-day Lucille Ball, earned her her very first Emmy nod this year.

Marie Claire: Your mother is music legend Diana Ross. Did growing up around that kind of stardom inform your career choices?

Tracee Ellis Ross: I don’t know that the stereotypical idea of what it is to be a child of somebody hugely famous necessarily comes into play in my life. My mom didn’t adhere to any of those typical rules. She woke us up for school every morning, and was there at dinner or would call at bedtime. She never left for longer than a week. She recorded while we were sleeping. I never heard my mom say, “Not now, I’m busy.” But I did have extraordinary experiences that I’m very aware were extraordinary. I mean, I traveled Europe before I was 12 years old, had been to the White House numerous times. Andy Warhol photographed me; Michael Jackson called our house. My mom would leave her job, and there would be throngs of people screaming and banging on our car. I come from a very private family, but I was born into a public family.

MC: Did you always want to be an actress?

TER: Throughout high school, I was obsessed with magazines. I used to just comb through them and plaster things on my wall. The clothing, the makeup, the freedom of expression in [the models’] bodies. It was Linda and Christy and Naomi at the time. So I modeled before college. My mom helped me. I was very shy growing up, but my shyness sort of manifested in a big personality. It would drive the photographers crazy because I would giggle and tell jokes. I was gregarious, and looking back, I realize I had a captive audience. One of the photographers was like, “Can you stop talking and try to look sexy for a minute?”

MC: How did you transition to acting?

TER: Sometime in my second year at Brown [University], I took an acting class. And the lightbulb went off for me. I fell in love with it. I realized that everything I was afraid of about myself, all my fears, could be used in that world. And it was exciting to me. And scary. After college, I shot a pilot for a show on Lifetime, which was basically House of Style for a TV lover. I think I got paid $1,500, and I was like, “Mom, I’m moving out! I made it!” I did two seasons of that, but I felt like a talking head and wanted to do more. Then I was cast in a movie [originally] called Mr. Spreckman’s Boat, starring Marcia Gay Harden and Jennifer Connelly. I felt like an “actress.” Both of them have won Oscars—maybe that means I might one day.