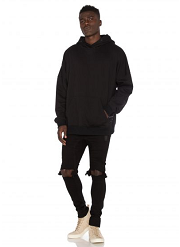 Rapper Tyga, who recently signed to Kanye West‘s G.O.O.D. Music (see it here), has another fashion collaboration he’s launching. He last collaborated with Marcelo Burlon County of Milan, which was released exclusively at Saks 5th Avenue (see it here).

The collaboration came about when Patrick DM’d Tyga on Instagram about a year ago, when he saw the Hip-Hop star wearing his label during New York Fashion Week.

After that, Tyga came into his store and bought more from his line and expressed interest in collaborating.

The Daniel Patrick x T-Raww collaboration capsule collection is set for launch September 22 and will be sold exclusively in the U.S. at the Daniel Patrick Los Angeles store on Melrose Avenue and online shop, along with contemporary e-tailer Revole‘s Revoleman.

The Daniel Patrick x T-Raww collection, priced from $110 to $600, consists of eight styles, including a bomber jacket, oversize T-shirt, hoodie and skinny jean.

All of the pieces were made in Los Angeles.

An event to kick off the collection’s launch is scheduled the same day as its release and will be held at the Revolve Social Club on Melrose in which Tyga and Patrick are expected to be in attendance.

In the beginning of the year, Tyga inked a modeling contract with One Management (see it here) and in the past, the Compton-native collaborated with LA Gear and Reebok.