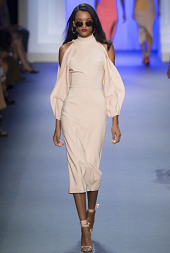 Last November, donbleek.com reported that designers Carly Cushnie and Michelle Ochs announced that they have sold a majority stake in their label, Cushnie et Ochs, to an investor group led by private equity firm Farol Assent Management (see it here). The brand has also hired Peter Arnold as their new CEO.

For Spring 2017, Cushnie and Ochs relied heavily on slashed and split silhouettes, jumpsuits, wide-legged trousers, and some blazers, in black, white, peach and pink. It was reported that the collection was inspired by Miami, and Michelle Pfeiffer’s character from Brian De Palma’s Scarface. “We’re women designing clothes for women, and we’ve been doing it for eight years now, and it’s working,” said Ochs.