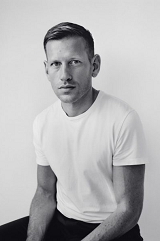 “We are excited to welcome such a dynamic and established talent into the company,” said Ferruccio Ferragamo, president of Salvatore Ferragamo, in a statement. “We have a proud history of nurturing design talent and we believe that Paul’s credo very much matches the spirit at the heart of our house.”

“It is a great honor to be invited to lead the creative vision for the future of its women’s shoe division,” said Andrew. “I look forward to bringing a new perspective to the company in line with the demands of today’s marketplace, marrying the power of its heritage and industrial force with high design and the latest innovations in material and make.”

Andrew will continue to design for his namesake brand, which he launched in 2012. The British designer has worked at Calvin Klein, Narciso Rodriguez, Donna Karen and Alexander McQueen.

His own eponymous label has won the Council of Fashion Designers of America/Vogue Fashion Fund and the CFDA Swarovski Award for Accessory Design and is sold at Saks Fifth Avenue and Barneys New York, as well as over 100 doors internationally including Colette, Bergdorf Goodman, and Lane Crawford.