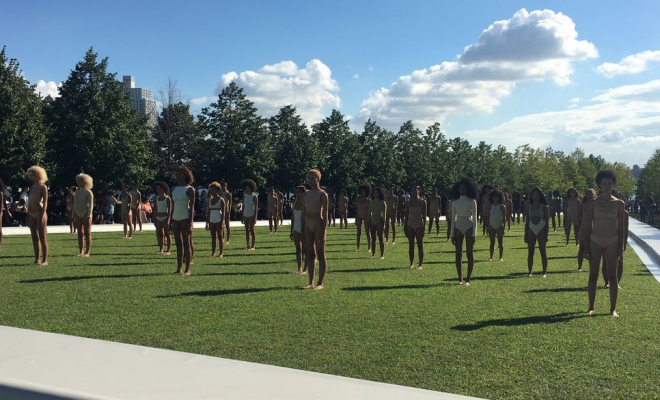 Kanye West’s Yeezy Season 4 Show Features An Array Of ‘Multiracial’ Women; Everything You Need To Know West‘s G.O.O.D. Music artist Teyana Taylor (she had on a black cutout bodysuit under a jacket with ankle boots), model Chanel Iman (she closed the show in head-to-toe black, including a T-shirt, parka and track pants), model and music video regular Amina Blueand (she wore a beige bodycon dress with lucite pumps), Sofia Richie, the 18-year-old younger sister of Nicole Richie and rumored girlfriend of Justin Bieber (she styled in a green hooded sherling coat and oversized white knee boots) were some of the famous faces who walked during the presentation.

As for the clothing, it was in line with West’s past seasons, mostly in shades of nude and neutrals and still very body conscious. Most of the models were wearing transparent bodysuits, skirts, skin-toned bra tops, leotards, and shorts.

Kanye‘s show featured an array of ‘multiracial women despite receiving backlash for his controversial cast call, a lot of angry people on social media accused the designer of only wanting light-skinned women walking during the presentation, which was far from true. There were both light – and – dark -skinned women in the show.

Finally, some of the models looked uncomfortable, many chose to sit down during the show and unfortunately, one even fainted (models were standing outside in the heat). Some editors were unhappy, walked out during the middle of the presentation and also mentioned that they should just write “nothing” about the show. Some even went as far as calling for a Yeezy boycott.

Still the man himself, seemed to keep his cool. West ran out to take his bow in an all-black ensemble.