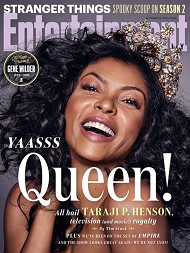 Empire‘s Taraji P. Henson covers the latest issue of Entertainment Weekly. The 45-year-old BET and Golden Globe Award winner is gearing up for Season 3 of Fox and Lee Daniels‘ Empire and the release of upcoming memoir, Around The Way Girl (on sales October 11). She’s also releasing a cosmetics line with MAC, and starring in Hidden Figures (due this winter), in which she plays real-life NASA mathematician Katherine Johnson “This is my first time carrying a show and then going to carry a movie,” says Henson. “That’s a lot. It’s so stressful, and I had to really check myself because it’s so easy to take for granted when you get to a certain level. Like check yourself because people pray to be here.”

Below are some excerpts from Henson‘s interview with EW:

How long does she want to be play Cookie on Empire?

Henson adds, “I love features ‘cause it’s a chance for everybody to remember she’s a character actress, not just Cookie.” ← Previous Story Mary J. Blige To Guest Star In ‘How To Get Away With Murder’
Next Story → Back-To-Back: For the Second Year In A Row, Lupita Nyong’o Covers Anna Wintour’s Vogue October Issue