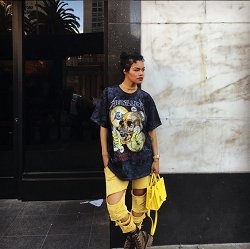 Taylor will recur as a rapper discovered by Nikki (Afton Williamson) who is one of the first artists signed to the label that Barry Fouray (Wood Harris) is launching.

The Breaks is executive produced by Seith Mann (The Wire) and John J. Strauss (Mozart in the Jungle). The series is set to air in 2017.

In addition, Taylor will also appear on VH1’s upcoming Hip Hop Squares. Based on the long-running game show Hollywood Squares, the update hails from Ice Cube and features celebrity contestants testing their wits and pop culture knowledge with the superstar squares, featuring the famous faces from Hip-Hop, comedy and entertainment.

She is repped by ICM. ← Previous Story Chloe & Halle Bailey, Fergie, And Blac Chyna For The September 2016 Issue Of Paper Magazine
Next Story → The GREATEST To Ever Do It: Barack & Michelle Obama Covers The October 2016 Issue Of Essence Magazine