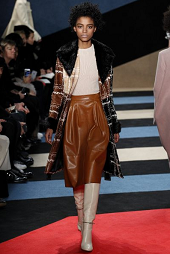 Derek Lam Will Present His Spring 2017 During New York Fashion Week, But Not On The Runway HE IS NOT SHOWING ON A RUNWAY, BUT A HOTEL INSTEAD.

American fashion designer Derek Lam has vacated his normally Sunday at noon time slot at New York Fashion Week – and the runway altogether. Instead, he will present on September 14 at the Greenwich Hotel.

According to WWD, “Lam plans to show 24 looks and personally narrate the presentation for a small group of press and buyers. He’ll show in the hotel’s penthouse designed by Belgian designer Axel Vervoordt and Japanese architect Tatsuro Miki.”

“In this moment, when there’s so much noise, and I don’t know really what way the fashion cycle will change, this is an opportunity to be centered and think more succinctly,” said Lam about his decision to downscale his presentation. “I can present something that is tight and nuanced and concentrate on talking about what my collection is about.”

If the crowding of the schedule and conflicting opinions on the best way to show influenced Lam’s decision, so did the fact that wholesale has been struggling and e-commerce has become a dominant channel for him. “We have to create a site that is interesting,” said Lam. “Sometimes a runway photo doesn’t translate online and we need to create hero pages and editorial stories. Being able to reallocate some of those [runway show] dollars is a very wise and necessary choice for us.”

Lam has been actively rethinking his approach to publicizing his collections. For pre-fall, which is in stores now, he didn’t release images outside of his own web site. “It’s early to say what the reaction is, and what the end client is thinking, like, ‘Where is this collection?’” said Lam. “But our business online is growing incredibly so that invigorates us to create more assets for the site.”