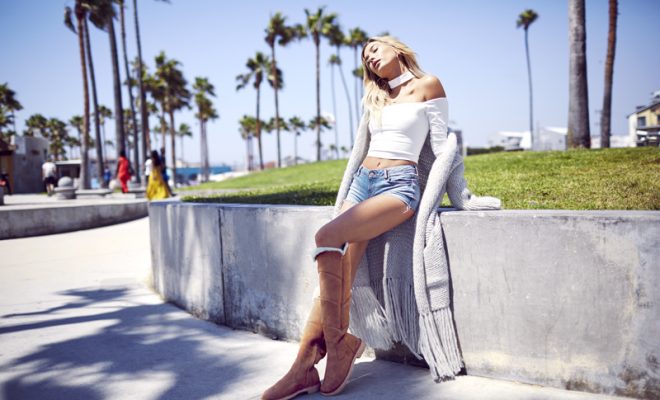 So far, Hailey Baldwin has had a pretty busy year. Back in March, donbleek.com reported that the daughter of Stephen Baldwin has signed a global contract with IMG Models (see it here). She also appeared Tommy Hilifiger’s Tommy Jeans Campaign, was featured in Marie Claire‘s ‘2016 Fresh Faces’ issue, starred in GUESS campaign and Tommy Hilfiger’s Denim Fall 2016 campaign.

The 19-year-old model is now starring in an advertising campaign for Ugg‘s classic street collection. She was tapped by the brand to launch the next evolution of their iconic Classic Boot silhouette. The campaign was shot near Venice Beach by Mike Rosenthal.

The new Classic Street collection, which consists of five styles ranging in price from $150 to $300, has an edgier, more modern look than what consumers typically associate with Ugg.

“I love Ugg and remember being really excited the first time I ever got a pair because all of my friends had them they were really cool. Basically if you didn’t have Uggs, you weren’t as cool. I love the Classic Street collection because it’s a little bit more wearable. It’s not just for inside the house, it’s actually something you want to be out on the street in and incorporate as part of your everyday outfit. Working with a brand my friends and I have always worn and loved is awesome, especially as this collection shows how far Ugg has evolved. If I had to sum up Ugg in three words it would be classic, comfortable and cool,” Baldwin said in a press release.