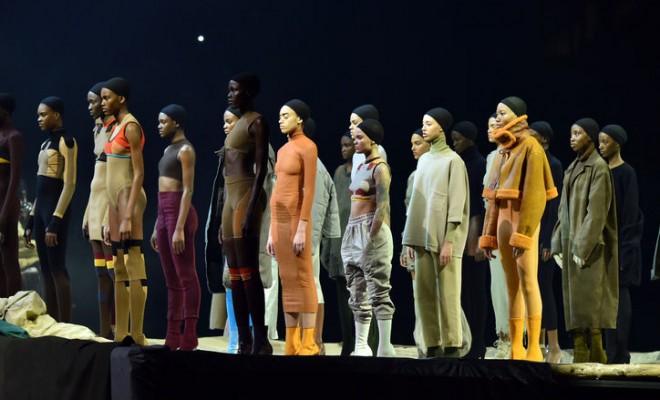 Back in June, donbleek.com reported that adidas and Kanye West were launching adidas + Kanye West, “a Yeezy-branded entity creating footwear, apparel and accessories for all genders across street and sport.”

Under the new partnership, the West-designed Yeezy products for adidas Originals are to extend beyond its current lifestyle focus to include performance, thus “offering options for both sport and street,” the company said this morning (see the original story here).

In the latest West news, the iconic music artist and fashion designer will present his Yeezy Season 4 fashion show on September 7th, which is the first day of New York Fashion Week. West‘s reps confirmed the news to WWD, but weren’t able to provide an exact location or time.

Tom Ford‘s presentation and Cartier Fifth Avenue mansion unveiling are scheduled on September 7th as well – both kicking off at 7 p.m.

A lot of the pieces were built on sampling (Raf Simons, Rick Owens, Coach or a visit to the army store for military-inspired clothing). The models were outfitted in ripped, raggedy, oversized or too small clothes. Some of the clothes were falling off the models, while it looked like other models had to squeeze into their clothes.

The collection extends in different directions than Season 1 and Season 2: louder, larger and brighter than the neutral-toned sweats, knits, boots and bodysuits he has presented in the past. However, Athleisure, street-inspired silhouettes, and athletic elements were featured in the collection yet again – bodysuits, cargo wear, oversize outerwear, shearling coats, tights, sweaters, denim overalls, hoodies, and crewnecks.

I think the issue with Kanye is that he’s not devoting all of his time to fashion. He’s still trying to juggle his line with his music career. Could the Kardashian family be ruining his legacy? If he really wants this, then he’s going to have to really hunker down and take a different viewpoint. Victoria Beckham was once a pop singer and she succeeded in the fashion industry because fashion is now her one and only job. She gave up on her music career to pursue her fashion line.

Kanye‘s music talent is there, but when people are really successful the way Kanye has been in music, they’re hoping and expecting their notoriety and fame will just translate across a lot of products. The fashion industry requires a lot of dedication and work. Some people will buy Kanye’s products once just because of his notoriety, but if the products doesn’t deliver, they won’t buy them again. You can’t base a fashion business on just fans. People base fashion on quality, does the clothes make you look good, does the clothes make you look sexy, they have to fit perfectly, they have to be in the right price range, they have to look different from what’s already out there. Clothes have to deliver as a whole. This is nothing new! This is the very proposition that ever serious creative designer or artistic director struggles with day in and day out. And that’s not any different for Kanye.

What demographic is Kanye aiming for? Designers have been passionate about fashion for years and worked hard to get to where they are. They’re not so prone to just letting people come in and just turning into a big deal. These are some talented people. They’ve been preparing for this all their lives.