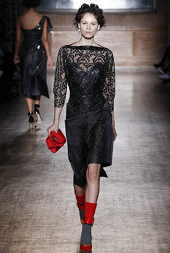 Vivienne Westwood continues to make news in the fashion realm. Last fall, she opened her first New York flagship boutique. The store is located on 14 East 55th Street, and it was reported that it took up three floors of the six-story building. The boutique included the Ready-To-Wear lines Gold Label, Red Label, Anglomania and MAN (see it here). Last February, the Red Label was folded into Westwood‘s namesake line, a change reflected in the fall 2016 show during London Fashion Week, and she announced that her Gold Label would be renamed Andreas Kronthaler for Vivienne Westwood, to reflect her husband Kronthaler‘s impact on the collection.

Today, the English fashion designer and businesswoman added another change to the mix: According to Fashionista, “In January, the brand will show both the men and womenswear fall 2017 collections together during London Fashion Week Men’s. There will be no runway show during the spring 2017 womenswear shows in London in September, though the collection will be available for view via lookbook and private appointments.”

“The decision follows the company’s wider strategy to simplify its line portfolio by unifying its mainline collections under a single brand umbrella,” said the brand in a statement.

“The Andreas Kronthaler for Vivienne Westwood collection will continue to show in Paris in October as a unisex line. The Anglomania, Worlds End Collection and accessories lines will also continue as before.” ← Previous Story Christian Louboutin’s Fall 2016 Campaign Was Inspired By The 1970s Disco Nightlife In Paris
Next Story → Zayn Malik For GQ Magazine; He Will Release A Collection With Giuseppe Zanotti Next Year