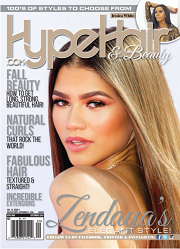 This time around, Zendaya covers Hype Hair‘s September 2016 issue. Below are some excerpts:

Actress Zendaya is a force to be reckoned with, and has garnered the respect and love of many in the hair, beauty and fashion industries. In fact, in just a few short years, Zendaya has managed to nab several major deals with many of the most cutting edge and innovative brands in the world!

So, we’re glad to have her grace the cover of Hype Hair magazine’s September 2016 issue. Inside, we highlight the beauty chameleon’s partnerships with such industry heavyweights as CoverGirl, Material Girl and CHI.