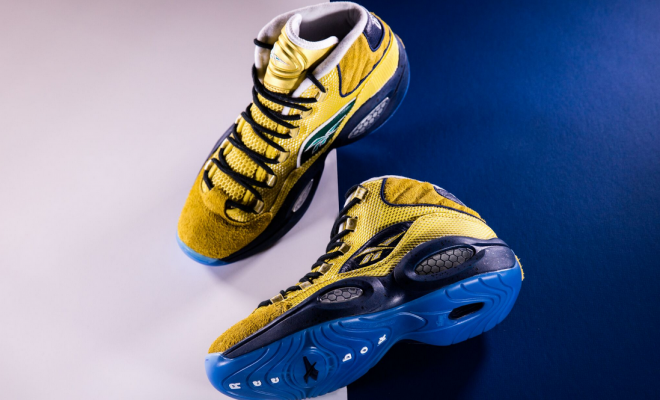 Uptown Harlem: Reebok Links With Rappers Cam’ron & Jadakiss To Launch The Question Mid EBC And A5 Sneakers At Rucker Park If you’re ever in NYC in the summer, going uptown to Harlem‘s Rucker Park is a must. The Rucker is legendary. Just about every NBA player, rapper, boxer or major person in sports and entertainment been to the Rucker before to watch the summer basketball series. Some basketball players including Allen Iverson, Kobe Bryant, Kevin Durant, Vince Carter, Julius Erving, Michael Jordan, Dwayne Wade, Carmelo Anthony, Chris Paul and more even played in the iconic basketball tournament. Hip-Hop star Nas shot his “Made You Look” video there. Mike Tyson used to drive to Rucker Park in a Lamborghini truck.

A week before being selected as the #1 pick in the 1996 NBA Draft, Iverson went to Rucker Park on a hot summer night (June 18th, 1996) for the Entertainer’s Basketball Classic (EBC) and brought his electrifying mastery of the court to life to a crowd of fans that overflowed the park.  Largely credited with introducing his version of street ball to the larger basketball community, Iverson wowed everyone with his bombastic, unapologetic style of play that he would hone throughout his career.

To commemorate Iverson‘s historic appearance at Rucker Park, Reebok Classic teamed up with the EBC program’s founder Greg Marius for the Reebok Question Mid EBC.  The style pays homage to the color scheme that Iverson wore that evening, with an upper made of jersey mesh, gold suede and navy leather.  The words “Standing Room Only” replaces the Question logo at the collar of each shoe, referencing the packed fans that night at Rucker Park.

The Reebok Question Mid EBC will be available for $139.99 next Friday, August 5th at retailers including Reebok.com, Jimmy Jazz, Footaction, Finish Line and Champs.

Allen Iverson, Jadakiss and Reebok have had a long and colorful history together.  In 2001, the three parties came together to shoot a game-changing commercial for Iverson‘s A5 sneaker launch that year.  Shot entirely in black-and-white, Jadakiss penned an original song for the commercial, which showed Iverson displaying his infamous skills while Jadakiss rapped along in beat to Iverson‘s performance, cementing Reebok as the first brand to truly fuse Hip-Hop with the sportswear industry.

To commemorate this historic moment, the Question Mid “A5” takes color inspiration from the OG A5 sneaker, with a sleek black leather and mesh upper accented by reflective grey piping and toe box.  Hits of red adorn the sole with a distinctive red Question logo at the collar and a Roman numeral “V” logo at the heel.

The Reebok Question “A5” will be available for $139.99 on Friday, August 12th, at retailers including Reebok.com, Jimmy Jazz, Footaction, Finish Line and Champs.