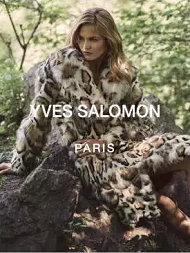 Yves Salomon fur coats, especially the lined parka is known to be a must have for celebrities like Pusha T, Fabolous, Big Sean and Kanye West.

The French fur brand has officially opened its very first New York City store on the Upper East Side. The 800-square-foot boutique is located at 790 Madison Avenue between 66th and 67th Streets and opened last December (see it here). The line first went stateside in 2011 with its inaugural store launching in Aspen, Colorado also known as “ski heaven“.

In the latest Yves Salomon news, “the luxury brand is moving its showroom and press department to a 5,380-square-foot space on Rue de Castiglione in Paris’ 1st arrondissement, which will be officially inaugurated during the upcoming Paris Fashion Week, which begins late in September,” according to WWD. It will present its latest collection on Oct. 2.

“It was important for us to have more structured space to present our different collections, while growing our newer categories, including men’s wear, children’s wear and capsule lines,” Yves Salomon, the firm’s president, told WWD.

“In addition, the showroom will also include the main collection and the Army line, with a sportier take and a series of military parkas among its strongest looks. There’s also the Meteo collection, which cycles in more color to attract a younger customer and that will debut a summer range for 2017, as well as accessories.“

In one image, Pajak wears a jaguar-print fox coat. The ads are slated to break later this month in magazines, starting with the September issue of U.S. Vogue.

The label’s other departments, which include skin, manufacturing, style, modeling and fitting, will remain at Cité Paradis in the 10th arrondissement. The photos used in this post (with the exception of the profile pic) are from Yves Salomon’s New York City boutique.