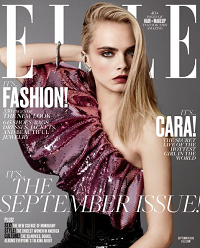 For this issue, she wore a top and pants by Philosophy Di Lorenzo Serafini, Gucci fur coat, Saint Laurent dress, and more.

Inside, she talks about taking up yoga, why she opened up about her personal struggles on social media, on Suicide Squad costar Will Smith putting “emotions first,” why she crying is the most challenging part of acting and much more. . Head over to Elle to read some excerpts.