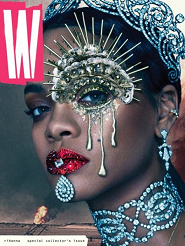 The September issue is the most important and biggest issue of the year for fashion publications. Candy Pratts Prince once said, “September is the January in fashion.” September’s fall fashion issues holds a lot of weight and most luxury houses spend the most amount of advertising dollars in this particular issue.

At one point and time, it was very rare to see a model of color on a September issue. However, things changed a bit last year, when models of color dominated the September issues. Last year, donbleek.com highlighted 14 people of color on the cover of September 2015 issues (see it here).

On the cover, the Bajan-beauty debuted a futuristic look and was draped in Cartier jewelry as well as her own pieces. She also wears some stylish ensembles.