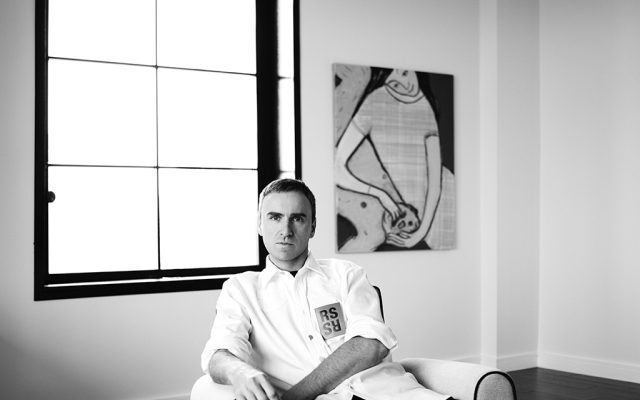 Simons was already a household name before taking a creative director role at Christian Dior. He presented his eponymous Fall/Winter 2016 outing, entitled, ‘Nightmares and Dreams,’ at Paris Fashion Week back in January (see it here).

Simons had a non-compete with LVMH Louis Vuitton Moët Hennessy (owner of Dior), but it expired at the end of July. The iconic American house (Calvin Klein) broke the news via Instagram, Twitter and Facebook.

“The arrival of Raf Simons as chief creative officer signifies a momentous new chapter for Calvin Klein,” said Steve Shiffman, CEO of Calvin Klein, Inc. “Not since Mr. Klein himself was at the company has it been led by one creative visionary, and I am confident that this decision will drive the Calvin Klein brand and have a significant impact on its future. Raf’s exceptional contributions have shaped and modernised fashion as we see it today and, under his direction, Calvin Klein will further solidify its position as a leading global lifestyle brand.”

Calvin Klein has also appointed Pieter Mulier, Simons right hand man, creative director, reporting directly to the designer. “Mulier will be responsible for executing Simons’ creative and design vision for all men’s and women’s apparel and accessories lines within the Calvin Klein brand,” the company said in a statement. The company said he will also manage all men’s and women’s design teams within the Calvin Klein brand, under Simons’ leadership.

The company said the appointment of Simons marks the implementation of Calvin Klein’s new global creative strategy that was noted in April. The strategy aims to unify all Calvin Klein brands under one creative vision. It is part of the global evolution of the brand that began with the reacquisition of the Calvin Klein Jeans and Calvin Klein Underwear businesses in 2013 by PVH Corp.

The company said that the Calvin Klein brand “looks to grow [the business] to $10 billion in global retail sales,” and that the new leadership is intended to further strengthen the brand’s premium positioning worldwide and pave the way for long-term global growth.