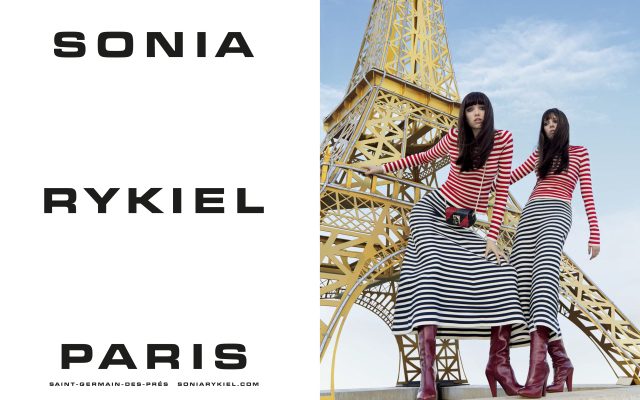 Earlier this year, French fashion label Sonia Rykiel Paris opened its first free-standing store in North America at 816 Madison Avenue in NYC, since it closed its original store a few blocks away in 2011 (see it here).

The campaign that will accompany the arrival in stores of her fall collection consists of five visuals featuring two models who look like twins in front of a scale model of the Eiffel Tower. They were lensed on a hotel rooftop in New York.

“We wanted to reproduce the spirit of Paris,” explained de Libran. “We created this repeated image so we cast Grace [Hartzel] and Matilda [Dods] as identical twins and dressed them in the same way. I felt this exaggerated image was quite straightforward, playful and surprising, as is the Rykiel woman.”

The print campaign is slated to break on Aug. 15 in magazines in the U.S., U.K., France, Korea and Japan. The campaign is going to be plastered on Paris kiosks as well and a video will be used for social media starting in September.