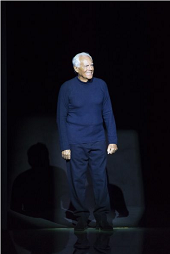 Giorgio Armani is winning our hearts. A couple of weeks ago, donbleek.com unveiled his Fall 2016 advertising campaign for his New Normal women’s line. The ad showed a range of diverse beauty (see it here).

Now the Italian fashion designer is speaking about the future of his company. Today, Armani confirmed he had established the Giorgio Armani Foundation, a much rumored entity.

“I decided to create the Giorgio Armani Foundation in order to implement projects of public and social interest,” said Armani.

“The Foundation will also safeguard the governance assets of the Armani Group and ensure that these assets are kept stable over time, in respect of and consistent with some principles that are particularly important to me and that have always inspired my activities as a designer and an entrepreneur. These founding principles are based upon: autonomy and independence, an ethical approach to management with integrity and honesty, attention to innovation and excellence, an absolute priority to the continuous development of the Armani brand sustained by appropriate investments, prudent and balanced financial management, limited recourse to debt and a careful approach to acquisitions,” he added.

In a nod to questions hanging over future developments for the company he founded, Armani concluded: “With this decision, taken in the name of continuity and secured by the foundation and my heirs, I would like most of all to bring reassurance to all the people of the Armani Group who work with loyalty and passion and who have always had faith in me, as well as to all those who over the years have contributed to the long-lasting success of this company and to whom I shall forever be sincerely grateful.”