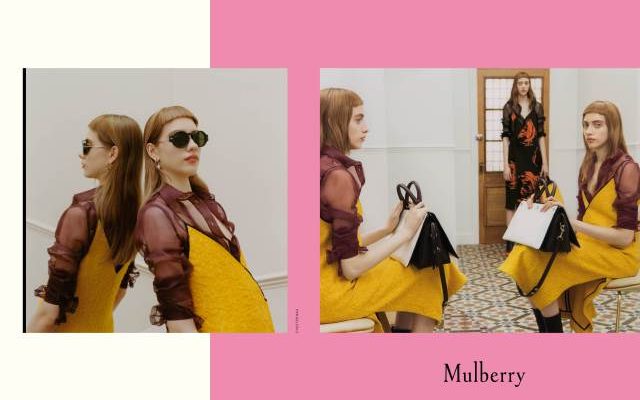 Photographer Coco Capitain shot the ad for the British fashion company. The sisters are photographed as each other’s reflection. One is styled in a sheer plum blouse and a yellow jacquard slip dress, while the other wore a similar outfit in a darker palette. The brand aims to highlight the different qualities of the Mulberry woman, which it described as “strong and striking, yet soft and feminine.”

“Lia and Odette have such distinctive looks and we played with their ‘twinness’ to twist the idea of reflection – sometimes you’re looking at one girl in a mirror, sometimes you see two, reflecting each other in their pose instead. The result is intriguing and playful,” said Johny Coca, creative director of the British luxury brand.

According to WWD, “The Mulberry campaign also places focus on the new range of accessories designed by Coca, including studded hoop earrings, playful round-frame sunglasses and the label’s new handbag style, the Chester, which features a color-block tote with military-inspired silver hardware.”

“Following Coca’s debut collection last February, Mulberry has brought its average prices down and invested in product design and development. Thierry Andretta, the company’s chief executive officer, explained that his aim is to work alongside Coca to transform Mulberry into a lifestyle brand, with leather goods at its core, and full footwear and ready-to-wear lines that channel the label’s British roots and bohemian flair.”

“We really want a complete 360-degree vision in every category and to target both the existing and aspirational customer,” Andretta told WWD earlier this year.

The new campaign will break in September issues of publications such as British Vogue and Harper’s Bazaar U.S., and there are plans of releasing that month a second video exploring the “Self/Reflection” theme featuring more products from the fall 2016 range.