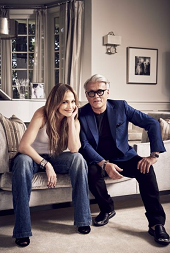 The duo will create a capsule shoe collection together called Giuseppe for Jennifer Lopez (#GiuseppexJennifer). According to WWD, “The line will be shown at Footwear Fashion Association of New York from Aug. 2 to 4 and  launch at retail in January at Bergdorf Goodman, Saks Fifth Avenue, Neiman Marcus, Nordstrom and Giuseppe Zanotti stores, as well as select retailers worldwide. The range also includes two handbag styles and will retail from $795 to $1,995.”

The Bronx-native has built a fashion and retail empire outside of music and acting. She launched fashion lines in the past, 18-fragrance collection with Coty, which has generated estimated retail sales of $2 billion over its 14-year lifespan and a jewelry collection for Endless.

“I’m very proud of the businesses I’ve built,” Lopez says. “They’ve allowed me to bring really great product at an accessible price point. But I hadn’t done a high-end project yet and this seemed like the right time, medium and designer. I’ve always been passionate about shoes. Sometimes I even choose an outfit around my shoes.”

Lopez says, “Giuseppe is a designer I’m very loyal to because of his beautiful silhouettes and craftsmanship. It’s impossible not to feel like a more confident, sexier version of yourself when you’re wearing a pair of Zanottis. The shoes are so in line with my personal style, it felt easy and natural.”

Zanotti describes working with Lopez as such: “It’s the first time I’ve done a real collection for a celebrity. I used to do in the past one shoe, two shoes. In this case it’s not enough to describe her. She likes to dance, she likes to sing, to walk and go shopping, and she has kids. She’s a beautiful and normal woman. I need to create something not only for red carpet or couture but something for reality. We have probably 18 styles at the moment. It’s a small universe.”