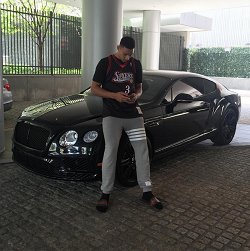 NBA player Ben Simmons, who was recently drafted number one by the Philadelphia 76ers posed in front of a black-on-black Bentley in a Philadelphia 76ers #3 Allen Iverson jersey which he wore with a pair of $570 Thom Browne Intarsia Stripes Cotton Jogging Pants.

These slip on style sandals feature a synthetic upper & lining and rubber sole.

The Thom Browne pants are available at Luisaviaroma.

The Gucci sandals could be purchase at Nordstrom, Neiman Marcus and Mr Porter.

On July 3, Simmons signed his rookie scale contract with the 76ers and joined the team for the 2016 NBA Summer League. He went on to be named in the All-Las Vegas Summer League First Team, and over six Summer League games, he averaged 10.8 points, 7.7, rebounds and 5.5 assists per game.