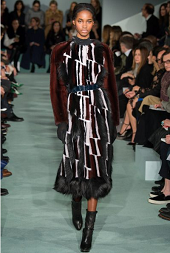 “After almost two years at Oscar de la Renta, personal circumstances require me to return to Europe. I have loved my time in New York where I hope to return at some point in the future,” Copping said in a statement via BoF.

“We have always been in the business of creating beautiful clothes,” said CEO Alex Bolen. “and two of our greatest assets are our design studio and atelier. Our team will continue to work on next season’s collection with a keen focus on the level of sophistication and craftsmanship that are the hallmarks of the house. We wish Peter well in his future endeavors.”

Copping‘s successor was not named.

Copping was born in Oxford. He always dreamt of being a designer. In 2012 he told Iris Apfel, who was speaking with him for Interview, “I can remember when I was young I used to make dresses for my sister’s dolls. I’d find scraps of fabric. I can remember having some amazing green lamé that I just loved, and making a little tunic dress.”

He attended Central Saint Martins and the Royal College of Art in London. He interned for Christian Lacroix in Paris while still an undergrad. After a post-graduation stint at Iceberg, he went on to Sonia Rykiel and then Louis Vuitton, where he worked under Marc Jacobs beginning in 1997, eventually becoming director of womenswear at the house. Copping was appointed to the Nina Ricci job in 2009, after Olivier Theyskens‘s departure.