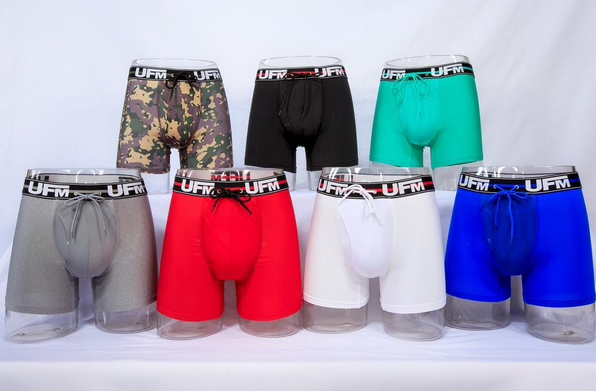 Some guys are truly clueless when it comes to undies. Appearance matters in today’s society: men being well groomed and smelling fresh is just as important as what you’re wearing under your designer suit, casual attire , work wear or sports clothes. A great pair of boxer briefs or briefs from UFM Underwear For Men will keep you confident and feeling sexy all day.

It’s pretty hard to hear a woman complain about a man in boxers (unless they’re dirty or have holes), but the thing is, boxers don’t usually provide the support men need. Briefs are pretty cool. UFM Underwear has revolutionized briefs with an adjustable pouch that isolates and supports your manhood. Most guys own at least one pair of briefs. They are the go to style that has been around for centuries. However, traditional briefs loose support throughout the day and tend to wear quickly. UFM’s briefs are built for support and made to last. The stretchy mesh fabric pouch moves with your body. The lightweight, breathable fabrics are soft, but durable and comfortable. The support adjusts so it won’t wear out in the wash. Tie the drawstrings tight for extra support or loose for light support.

Personally, my favorite undies are boxer briefs. They fit well, they make me feel like I’m not suffocating my manhood, and of course, UFM‘s boxer briefs look nice and they also come in an array of colors: black, red, camo, grey, white, royal and turquoise.

Every pair of UFM Underwear has a drawstring pouch made of soft, breathable mesh fabric designed to isolate and support keeping you cool and comfortable. The drawstrings adjust to the size of your manhood. You could tie them tight for extra support and light for loose support.

Everyday
Some men like to wear UFM boxer briefs all day, every day. They are tired of underwear that doesn’t offer protection from rubbing, chafing and sagging. They wear UFM under their suits, under their jeans, under their military and police uniforms. They wear UFM for sports AND leisure. From the minute they wake up until the minute the go to bed, UFM is the underwear they wear to support their manhood. If this describes you or someone you know, click here.

Work
Some men like to wear UFM boxer briefs for work. They work outside in the heat. They stand on their feet for long hours. They deal with chafing, rubbing, sweating and adjusting, all day, every day. They have seen past mud butt. They need a mens work underwear that is built for support and made to last. If this describes you or someone you know, click here.

You could purchase some of UFM‘s products now on their online store.