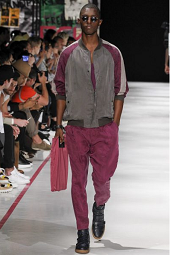 For his latest offering, Geller once again embraced his German roots. The collection was a mix of high and low, loud and reflective, merry and melancholy, it worked perfectly.

Inspiration: The collection was inspired by the 80s music scene of Berlin: punk and Neue Welle (New Wave). Backstage, Geller said that he had channeled the unbridled “raw creativity,” of Nina Hagen, Einstürzende Neubauten, Palais Schaumburg, and other German-speaking bands—before the tidal wave of the London punk scene.