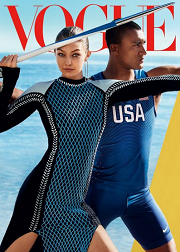 Gigi Hadid Is Vogue’s August 2016 Cover Star; This Is Her First Time Covering The American Edition The shoot was shot by photographer Mario Testino. Styling was courtesy of fashion editor Tonne Goodman.