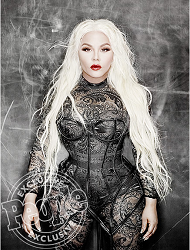 Not only is today Lil Kim‘s 42nd birthday, but tonight, the Grammy Award winning artist will be honored in a major way. The Queen Bee‘s longtime collaborators, The Lox, French Montana, Rich Homie Quan, Teyana Taylor,Desiigner, Dej Loaf and Jessica White are all paying tribute to the iconic rapper (who will also perform on stage!), and it’s also rumored that Mary J Blige will take part in the tribute.

The multi platinum recording artist and fashion icon kicked down the doors and broke a lot of barriers in the Hip-Hop industry. Literally, Kim changed the game. Before her, female rappers were rapping like men, wearing male clothes. Things changed when Kim came into the game; she started trends: female dressing sexy and rapping about sex, colored wigs, designer clothes, diamonds, and the luxury life. For over two decades, Kim‘s style has captivated the fashion industry. She is good friends with Marc Jacobs and Alexander McQueen used to take her to Milan, Cannes and Paris as his date to Fashion Week.

Kim will be seen across the country this summer as part of the Bad Boy Reunion Tour.

If that’s not enough, donbleek.com could officially confirm that the Brooklyn-native has signed up for Celebrity Big Brother. Kim will appear in the next series of the reality show, after being offered the highest-ever amount to be paid to a contestant. It’s reported that she was paid over £500,000, which translates to about $650,000 to appear on the show.

According to mirror.co.uk, “a source told the Daily Star newspaper: ‘Producers are thrilled they’ve finally got her. It’s taken a lot of cash but they are confident she will be worth it.'”

The insider added: “This will be Kim’s chance to set the record straight and have her say on all the rumors. Bosses are hoping she will be outspoken inside the house and make it an explosive series.”

Lil Kim is no stranger to reality television. She starred in her own reality series, Lil’ Kim: Countdown to Lockdown back in 2006, and appeared on The Apprentice and Dancing With The Stars.