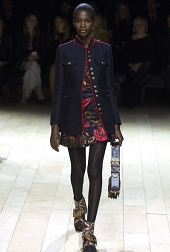 After Burberry already consolidated Burberry‘s Prorsum, Brit and London brands into one single label, which is now called Burberry (see it here), adopting a “see now, buy now” model (see it here), and revealing this past February collection in London, Paris stores, on Apple TV, E-Commerce website (see it here), there are still some new changes at the British luxury fashion house.

But before we get into those new changes, last month, donbleek.com reported that Burberry Group Inc said chief operating officer John Smith is stepping down after seven at the British house. It was reported that Smith is leaving to pursue new interests and will step down from the board by summer next year (see it here).

Today, we could officially confirm that Christoper Bailey is out as Burberry CEO. He will become president and chief creative officer. Burberry has appointed Marco Gobbetti chief executive officer. Gobbetti is currently chairman and CEO of French luxury brand Céline, a position he has held since 2008. He has worked in the industry for more than 20 years, having previously worked at Givenchy and Moschino.

According to BoF, “Bailey, who was appointed CEO in October 2013 in addition to his duties as chief creative officer, will take on the newly created role of president and oversee all elements of brand and design, working in partnership with Gobbetti, who will join the company next year.”

“I am very excited that Marco Gobbetti is joining us as chief executive officer and as a partner to me,” said Bailey in a statement. “Marco brings incredible experience and skills in luxury and retail with him that will be invaluable to us… On a personal level, I know that we are going to enjoy a wonderfully collaborative partnership that makes me very excited for our future at Burberry.”

Bailey and Gobbetti will both report to Burberry chairman John Peace.

Peace said, in a statement: “I am delighted that Marco will be joining us to work alongside Christopher in his new role as we embark upon the next chapter in our 160-year-old success story. He has an outstanding track record of delivering growth in the luxury industry and his vision for the sector and how it will evolve is extremely impressive. The board firmly believes that these new leadership roles coupled with actions, identified in the recent business review, will significantly enhance our ability to deliver long-term sustainable growth and sector outperformance over time.“

“Since taking on the combined role of chief executive and chief creative officer, Christopher Bailey has done an excellent job set against a backdrop of challenging market conditions,” Peace continued. “The review that he has led into our ways of working is the blueprint for the next phase of Burberry’s evolution. In order to maximise our ability to successfully implement these plans, Christopher identified the need for a new chief executive for the business who could partner with him as we execute on the new strategies and I am excited to see what they will do together.”