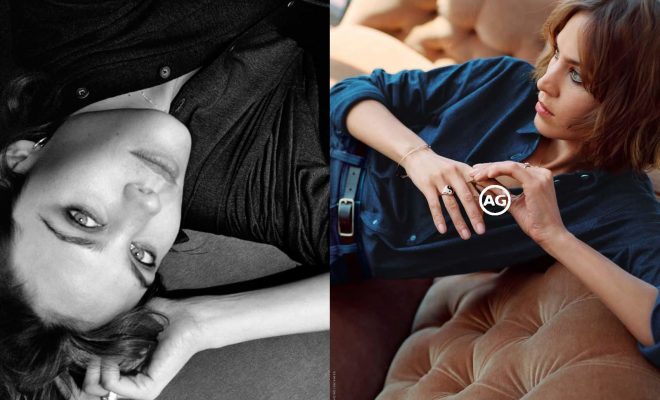 After already starring in AG’s Fall 2016 ad campaign (see it here), teaming up with the American brand (AG) for a 20-piece capsule collection called “Alex Chung for AG” (see it here), and fronting campaigns for Longchamp, Madewell, Mulberry, and Eyeko, British model and television presenter Alexa Chung is set to launch her eponymous fashion label.

The 32-year-old will step into the role of creative director at the helm of Alexa Chung, a contemporary-priced ready-to-wear line that will debut at retailers next spring (May 2017).

After collaborating with various fashion labels, Chung was confident enough to start her own label which will consist of denim, daywear, eveningwear, shoes and jeweler, as well as special products.

“I feel as though I’m kind of prepared to do it now. If it had been any time sooner than this, I either wouldn’t be responsible enough or have been able to take on this kind of feat,” she said in an exclusive interview via BoF.

“I just wanted the freedom to sort of make my own world, without someone else’s brand’s brief to stick to,” said Chung. “That was so fun, but there are certain boundaries that come with doing something on behalf of someone else, [you] kind of have to keep within their design remit.”

“I see this being the culmination of a lot of hard work for a decade and this being the resting place for all of those ideas and to continue kind of developing and growing that, just in this one home base space,” she said. “Also I feel like I need to get it up and running whilst I’m still young enough to have the energy and still be in touch with pop culture enough to make something that is actually relevant to the audience today.”

Chung will oversee a six-person design team, whose professional backgrounds include time spent at luxury fashion houses, as well as in other industries including music and art. She has appointed Haider Ackermann‘s former head of atelier, Edwin Bodson as managing director. Bodson was previously responsible for overseeing the commercial and product development for the Haider Ackermann’s womenswear pre-collections and its e-commerce offering.

According to BoF, “Chung’s first collection will be sold at selected luxury retailers like Selfridges, Galeries Lafayette, Matchesfashion.com, MyTheresa and SSENSE, as well as via a dedicated e-commerce platform. The brand will focus its launch activities in London, New York, Paris and Hong Kong, aiming to introduce some form of special project in each city in its first year, and Chung is eager to ensure the positioning of the brand is relatively accessible.”