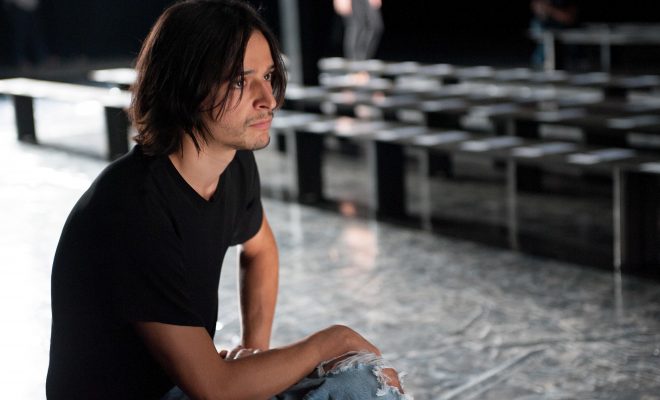 Olivier Theyskens To Return With Namesake Label; Will Show During PFW Belgian fashion designer Olivier Theyskens first launched his own line in 1997, but it shuttered in 2002 under mounting pressure from retailers and investors. He then went to work for Rochas, followed by Nina Ricci and Theory. In 2014, he left Theory (see it here) and has been quietly working on relaunching his eponymous brand, bringing on LVMH veteran Maximiliano Nicolelli as chief executive. He also spent time at Esteban Cortázar and mostly recently, La Perla, as his chief executive.

Theyskens is set to relaunch his namesake collection at Paris Fashion Week in October.

According to BoF, “Theyskens is developing the collection with a small team in a Paris studio, and doing much of his production in Italy.” “It’s a magical, extremely artistic approach,” Theyskens told BoF in an exclusive interview.

Theyskens and Nicolelli would not yet divulge specific price points, the collection will sit at the upper end of the ready-to-wear spectrum. “I personally never understood the phrase demi-couture,” Theyskens said. “My fuel is what I imagine a woman, a girl, would want to wear, want to find. I always embrace couture, as well as the reality of beautiful clothes. I like the mix.”

The collection will begin with spring and fall only, shown on the traditional calendar. Nicolelli and Theyskens have chosen to play outside of that realm. “Really, the product is at the centre of the scene,” Nicolelli said. “Yes, there are certain things that need to be adjusted. But each brand needs to find its own voice: the best way to portray the product and the best way to be out in the market. I’m very cautious of brands following each other. Personally, I think that’s a mistake, putting certain brands out of their core businesses.”

The retail strategy, explained Nicolelli, is to start slowly and exclusively, with limited partners and points of sale. “I would define it as targeted, keeping in mind the idea of developing a business at the right pace and also growing at a sustainable pace,” the executive told BoF. “We will create and develop strong relationships with multi-brand stores, but we don’t have the ambition of making an explosion in the market right now.”

Notably, Theyskens has chosen to self-fund the company. “It’s obviously interesting to partner with like-minded people that appreciate and value the artistry, but it’s not how we’re developing right now,” Nicolelli said of the potential of bringing on an outside investor. “Time will tell.”

Theyskens spent more than a decade designing clothes for other labels, where his innate talent often outshine the brands for which he was working. “I’ve evolved and changed, but my core, my identity, somehow has not changed. I’m still the same material,” Theyskens said. “It’s good for me to think back to what I personally want to do. When I was working for other brands, I was pushing a lot of stuff to the side that I would have done for [my own line].”

Theyskens said he wanted the relaunch of his brand to match his own interests. “I am gathering all the things I learned in Paris as well as in New York; my approach is a mix of all these experiences,” he said. “It’s important, especially when you’re starting a business, to look for excellence.”