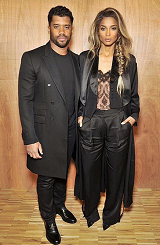 Last March, donbleek.com exclusively reported that pop star turned style icon and fashion model Ciara and NFL player Russell Wilson of the Seattle Seahawks got engaged on a private beach in North Island resort in the Seychelles (see it here).

After dating since April 2015, and being engaged for four months, the couple is now ready to jump the broom.

Cici and Russ Russ are set to tie the knot. A source confirmed that the engaged couple are getting married in England later this week.

Ciara, 30, and Wilson, 27, were spotted at Liverpool’s Titanic Hotel yesterday Tuesday (July 5) for their rehearsal dinner. The singer looked flawless in a long, flowy white gown that featured a chiffon tulle skirt and detailed halter top. The NFL quarterback was dressed in head-to-toe black as he escorted his soon-to-be bride hand-in-hand across the cobblestone path.

A lot of celebs including some of Ciara and Russell‘s closest friends flocked to London for the couple’s upcoming wedding including Lala Anthony, Kelly Rowland, Preston Pohl, Missy Elliott, April Woodard, Jennifer Hudson & her fiance David Otunga and more. Ciara‘s other bestie Serena Williams is already in London playing in Wimbledon. She will most likely take a break from her busy schedule to attend the wedding. No official photos have been released and no cell phone were allowed. However, Jennifer Hudson snapped a couple of pics en route to the private ceremony. UPDATE 2: Russell Wilson just posted an official picture from the wedding on his Instagram (see below).