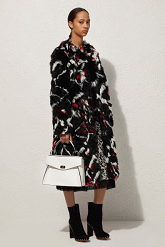 Proenza Schouler Is Cruising To Paris For Its Resort 2017 Collection New York-based label, Proenza Schouler is cruising to Paris For its Resort 2017 Collection.

The shakeup is thanks to MAC cosmetics. The Estée Lauder Companies owned brand, “is backing designers aiming to expand the reach of their pre-collection presentations,” according the Business of Fashion.

The long-term initiative will kick off this Cruise 2017 season with Proenza Schouler, which will show its collection in Paris on July 4 to coincide with the city’s upcoming haute couture Week.

Aside from the financial backing, MAC will also provide beauty from senior makeup artist Fatima Thomas—MAC has worked with Proenza Schouler for the past 16 seasons and will be backstage at more than half the shows on the haute couture lineup.

Proenza Schouler is standing by its commitment to keep any images associated with the collection under embargo until the clothes arrive in stores. Designers Jack McCollough and Lazaro Hernandez plan to present the clothes in intimate, no-social-media-allowed salon presentations on Monday July 4, (Independence Day in the United States).

The decision to show in Paris also reflects the label’s global intentions, underscored earlier in June with the appointment of a new chief executive, Judd Crane, who is joining the company from London-based department store Selfridges. ← Previous Story Alexander Wang Takes Over As CEO And Chairman Of His Alexander Wang Inc.
Next Story → adidas To Expand Kanye West’s ‘Yeezy’ Brand; Plus Open Stores In New Partnership