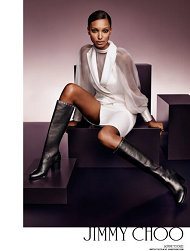 “The fall 2016 campaign is a reflection of the characters who embody the Jimmy Choo brand values both during the past 20 years and into the future. It’s a modern vision of our woman and it signals a bold new chapter,” said Sandra Choi, the label’s creative director.

Craig McDean photographed the campaign against a minimal background, while Sarah Richardson styled it.

The anniversary campaign images feature key fall styles including velvet pumps and lace-up boots, as well as Jimmy Choo signatures such as classic, pointed-toe pumps and strappy sandals. The ads will break in September issues worldwide, and will be accompanied by a video campaign that will appear on the brand’s web site.