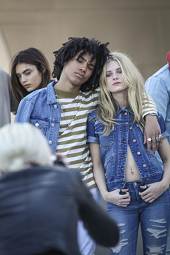 Pacific Sunwear of California Inc. hopes their new offering will boost its profile and generate sales in a big back-to-school campaign launching July 22. The teen retailer has nabbed models Luka Sabbat and Lottie Moss to promote the rebranding of its in-house denim line. “Renamed from Bullhead Denim Co. to PacSun Denim, the private label is pushing Nineties-inspired styles with the social media-savvy models, who were born just before the start of the Millennium,” according to WWD.

“Outside of Kendall and Kylie, it’s our second foray into getting top-tier talent,” said Greg Crawford, PacSun’s senior creative director, who oversees social media and the creative efforts on e-commerce and store design. “We’re banking on Luka and Lottie — who they represent, who they are.”

Before the actual shoot, Sabbat and Moss had limited contact with PacSun.

“I’ve never actually shopped there because, you see, in England we don’t have PacSun,” Moss said. “I know about them through Fear of God and Been Trill,” said Sabbat.

In its back-to-school collection, it’s checked off all the major trends that have quickly trickled down from the premium denim strata and interpreted them at prices ranging between $49.95 and $69.95: mom jeans, released hems, skinny styles, ripped knees and painted-on pants.