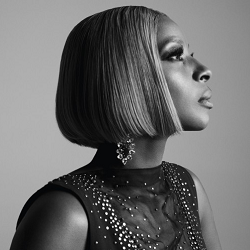 Multiplatinum award winning R&B/Soul singer Mary J Blige dropped her last album, The London Session in 2014. The album debuted at number nine on the Billboard 200 and number one on Top R&B/Hip-Hop Albums.

Mary is gearing up to release some new music and she also has a track with Kanye West. The New York-native collaborated with Yeezy for her upcoming new album.

The music artist, who is currently in New Orleans filming a role in the indie drama, Mudbound opposite Carey Mulligan and Garrett Hedlund for director Dee Rees, confirmed to The Hollywood Reporter that she did, in fact, do a song with Yeezy. But she won’t say what it’s called.

“I don’t want to give up the name of the song yet, but the album is mostly complete,” Blige says. “But I absolutely got a chance to work with the great Kanye West. And the song is crazy — I can’t wait for people to hear it.”

No announcement has been made yet about a release date for Blige’s new album, but it is reported that other artists who are expected on the disc are Hit-Boy, DJ Camper, B.A.M. and Jazmine Sullivan.

Mary did give details about what the track sounds like.

“The flavor of the track starts off with piano keys. It’s very dramatic in the beginning and it goes into a loud horn. That is, like an old sample horn,” she said. “And then this gigantic beat kicks in and I sing. He rhymes after my two verses. It’s incredible. He kills it. I wish I could give you the title, you’d flip but I just can’t do it yet.”