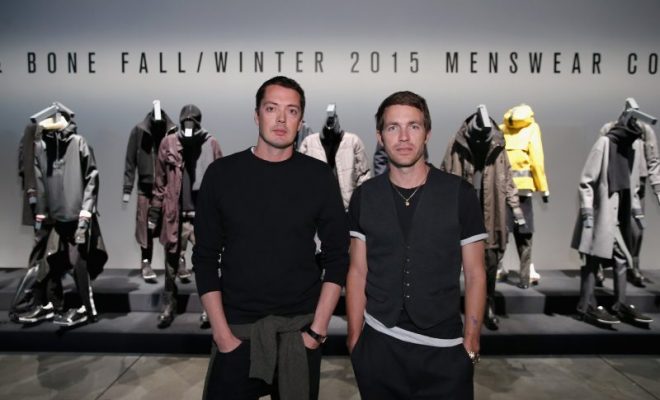 David Neville is leaving his post as co-CEO at Rag & Bone. His longtime business partner, Marcus Wainwright will become the brand’s sole chief executive officer and will continue to run the design and marketing sides of the business as well. Neville and Wainwright became the brand’s co-CEOs last year when former chief executive Mike Tucci excited.

According to Business of Fashion, “The executive is relinquishing his day-to-day responsibilities at the 14-year-old brand in order to pursue other projects. Neville will keep his seat on the company’s board of directors and remain one of the largest shareholders in the business, which is projected to generate more than $300 million in revenue in 2016, according to market sources.”

“We’ve known each other since we were kids,” Neville said of his partnership with Wainwright. The two have long shared an office, where they sit at side-by-side desks. “To be able to build a brand from nothing showed an awful lot of determination, ambition, grit and trust in one another to make it happen. I think that people could always see that Marcus and I were very committed and dedicated to what we wanted to achieve.”

“The shift comes as Rag & Bone, which employs about 300 people, is entering a new stage of growth, with increased focus on the direct-to-consumer portion of the business. Overall sales are up 20 percent year over year for 2016, with a double-digit increase in sales at stores open at least one year. The brand’s directly owned retail stores will generate about $100 million in sales this year.”

Rag & Bone opened its first store on Christopher Street in New York in 2008. “We’ve created a retail proposition that’s extremely productive. If you look at the penetration in our stores, it’s very nicely spread between shoes, denim, women’s ready-to-wear and men’s. It also helps with customer experience. When they see it all together, they can really get a sense of the aesthetics of Rag & Bone,” Neville said. Today, there are 22 Rag & Bone stores in the United States, including a Madison Avenue location set to open next week.

Wainwright credits the label’s retail success to the duo’s unwavering dedication to create a fully realized brand. “Other companies are finding it hard to go direct-to-consumer because it’s expensive. It’s not cheap to open a store,” he said. “It has become increasingly easy to lose people when they know everything instantly, so the stories you tell and the brand that you build are the key. That fine line between not being too precious, but also not overcooking it; that is the holy grail.”

Wainwright will continue to run the creative side of the business, including design and marketing. “For the longest time, we’ve been talking about the balance between art and commerce, and our roles really reflect that balance,” he said. “My job working on the design and marketing aspect of things, that [part] won’t change at all. We’ve built a team that can really run the business side of the business. But I’m sure [my role] will change in many ways.”

← Previous Story Donatella Versace On The Changing Fashion Calendar; “The Calendar Is In Shambles”
Next Story → Jaden Smith For The July/August 2016 Issue Of L’Uomo Vogue