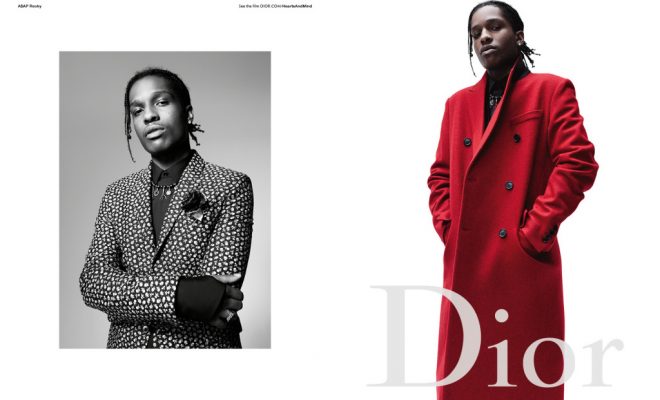 A$AP Rocky Is The New Face Of Dior Homme Style icon A$AP Rocky is the new face of Dior Homme (he is one of the four faces). The brand’s creative director, Kris Van Assche said, “I really like his personal style and taste. He’s a real fashion lover.” “He feels like fashion really influences his own work, and he has strong opinions on that.”

WWD interviewed Rocky at the brand’s Spring/Summer 2017 Menswear Show at London Collection: Mens. Rocky discussed his equal affection for elite, more formal brands — and those with an urban edge.

“I mean, it’s dope when you can mix it. It’s all about taking two worlds like streetwear and high-end and kind of mashing them together,” A$AP Rocky told WWD. “But when it comes to Dior, it’s just prestige and elegance in my opinion. It’s almost like Coco Chanel was for the lady.”

When Van Assche was asked how he selects his campaign faces, he said, “talents that inspire me. They come from different universes and different countries.”

Rocky is kind of a big deal in the fashion industry. He always sitting front row at fashion shows around the world, he’s appeared in campaigns for Alexander Wang, Ferragamo and DKNY, as well as countless editorials and magazine covers from Vogue and Interview to Dazed and i-D. The stylish Harlem rapper just released a capsule collection with J.W. Anderson (see it here).