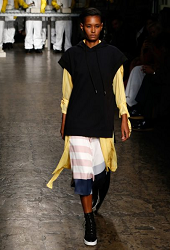 Last April, donbleek.com announced that New York-based brand, Public School would deviate from the fashion industry’s standard Fall/Winter and Spring/Summer show schedule starting in June 2016. The brand will now show men’s and women’s collections together twice a year. The collections will be shown in December and June and will be called Collection 1 (pre-spring and spring) and Collection 2 (pre-fall and fall). You could see the original story here.

The design duo Maxwell Osborne and Dao-Yi Chow presented their Public School Men’s Spring, Women’s Resort 2017 collection yesterday Tuesday (June 7) —  instead of the usual February and September — against a dystopian backdrop that served as an Orwellian wake-up call.

The brand made a global statement at the show: The stage was set as a mock factory, complete with a hero-less monument meant to symbolize “the rise of leaders who shouldn’t be leaders,” said Dao-Yi Chow. “It’s very dystopian and George Orwellian ‘1984.’ We need to wake up and snap out of it.”

The show ended with one factory worker spray-painting the full words, and the meaning, of the initials: We Need Leaders.

Models walked down the runway, sirens blaring, workers stood silent in assembly lines, their faces covered in black mesh, hands hidden in yellow rubber gloves with hammers and cement blocks before them.

The clothes were designed to represent the uniform of the revolution. Some of the clothes bore witness, printed with “WNL,” for “We need leaders“.

The women’s resort collection bore the same street influence as the men’s, and included sporty bombers, a few skirts and tops featured slashes, floaty silk slipdress, sleeveless hoodies, tailored blazers, military jackets and a trenchcoat. All of the looks were cut oversize and layered with abandon. “The collection’s dominant color [symbolizing] a call to action,” according to Chow.

“The concept of the show really was just a reflection of the political landscape that’s happening not only here in the states but all around the world,” Chow said backstage after the show. “Just this idea of false leaders and false icons that are being built up.”