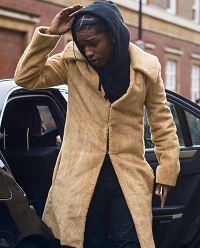 Harlem‘s own A$AP Rocky is one of the most stylish rappers in the game. His shows and music videos are so fashionable that you’ll think that you are watching a fashion show. His magazine covers and editorials are more stylish than a model posing in an issue of Vogue, GQ, or Esquire.

Rocky sported pieces from J.W. Anderson in the past and attended his show and it all paid off. Now Rocky and the London based brand are collaborating on a capsule collection of tracksuits, knit hats and fur “teddy” coats.

“What we do is completely different,” Mr. Anderson said via New York Times, “but fundamentally, that’s the beauty of fashion: You can meet in the middle on it. Everyone likes fashion.”

“I would never want to be a fashion designer,” said A$AP Rocky in an email via NY Time. “But I do have a lot of ideas.”

The new collection will be available on J.W. Anderson‘s website tomorrow Thursday (June 9) and  it will be available from the Shoreditch Workshops store on Monday, ranges from $275 for a beanie to $1,300 for one of the teddy coats.

Anderson allowed Rocky to do whatever he wanted, which is why he design a new logo, spelling out, inscrutably, JWA AWGE.

Pressed to elaborate, he offered: “It is a collective of creatives that come from multiple disciplines including visual arts, fashion and music. No one needs to know what the letters stand for. We know what it is, and that’s how we want to keep it.”

If you think that Anderson knows what AWGE means, then you’re wrong.

“He was allowed to do whatever he wanted to do,” Anderson said. “I don’t know what it means. I was just like, O.K., fine, whatever you want. I like that.”

Aside from attending fashion shows and events around the world, Rocky has also collaborated with Guess Originals and adidas Originals in the past. A sweatshirt from the same collection.