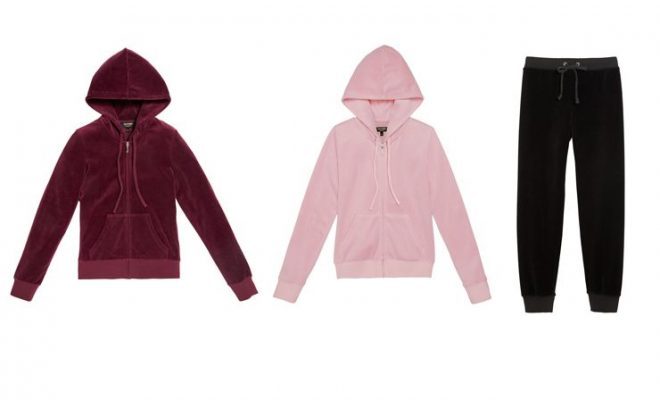 Juicy Couture Is Trying To Make A Comeback; Its Iconic Tracksuits Will Hit Bloomingdale’s This Summer American contemporary casual wear brand Juicy Couture shuttered all of its stores in the US in 2014, though there’s one lone store in JFK airport in New York. Soon after, the brand began being sold in Kohl’s and Macy’s.

A couple of years later, Juicy Couture is trying to make a comeback. Its iconic tracksuits which was seen on Jennifer Lopez, Mary J Blige and Paris Hilton in the early 2000s will be sold at Bloomingdale’s.

This launch — part of the exclusive 100% Bloomingdale’s offerings — focuses on four separates, which will be available in women’s and girls’ sizing: two jackets ($108 each) and two styles of pants ($88 a pop), available in a range of colors from black to olive to “whisper pink.”

“We love the classic tracksuit and felt it was important to retain the original head-to-toe look,” Brooke Jaffe, OVP and fashion director of ready-to-wear at Bloomingdale’s, told Refinery29. She explained that the retailer revamped the entire color palette, as well as the silhouette, adding a banded hem to the trousers for a slimmer fit. As to why now, Jaffe said she thinks the timing couldn’t be better. “Athleisure and casual, ‘off-duty’ dressing is an essential part of every woman’s wardrobe,” she noted. “Velvet is one of fall 2016’s most sought-after fabrications, and velour is velvet’s casual antidote.”

The collection is expected to hit Bloomingdale’s stores, as well as the department store’s website this July.