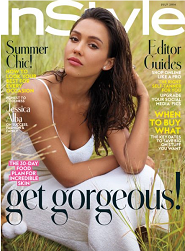 Thomas Whiteside lensed the shoot. The fashionista styles in a cream Victoria Beckham dress on the cover.

Inside, Alba talks about her childhood, latest movie role, being a sex symbol, her sexuality, starting The Honest Company and much more. Head over to InStyle to read the interview.

Last fall, donbleek.com reported that Alba is running a billion dollar empire. Her Honest Company was reportedly value at about $1.7 billion when we broke the story here.

We added that Alba was expanding the Honest Company (a company of non-toxic baby and homecare products). She launched a new beauty line, Honest Beauty. The range contains 17 skin care products — cleansers, a facial mist, moisturizers, wipes, etc. — and a whopping 66 makeup products, including foundations.

This past April, we reported that the Honest Company will soon release a line of hair products – for grown-ups, of course (see it here) and in May, we mentioned that Alba‘s Honest Co. may be entering sell mode, in addition to the original plan for an initial public offering (see it here).