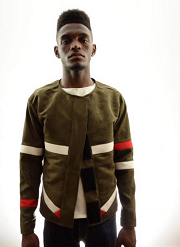 Where to do you currently reside: Brooklyn, NY

What inspired you to get into modeling: I was inspired to model after I saw an American Apparel calendar in 2013: From that moment, I was so determined to pursue modeling.

Have any agencies reached out to you yet: I was recruited by an agency like two years ago, but I’ve decided not to sign with them because I don’t think it was the best business move for me.

You were featured in editorials for American Apparel; how did that come about:

I started modeling for American Apparel in August 2013. I had the opportunity to model for them when the former CEO, Dov Charney asked me to model for his company while I was visiting the store he worked at. Two weeks prior to that, I was saying to my cousin, “one day I will be featured in the American Apparel calendar” and it really happened. I was featured on billboards in Los Angeles, New York, Korea and Spain.

You also modeled for Opening Ceremony correct: Yes, I started modeling for them in January 2015. I went to a casting call and a few months later, they said they wanted to work with me. I modeled designer pieces from Kenzo, Raf Simons, Bernhard Willhelm and Walter Van Beirendonck for them (Opening Ceremony).

Have you ever model for any other brands, designers or publications: I was featured in a lookbook for Gentry NYC. I’ve also model for local NYC-based brands including Toksickshop.

Favorite Things to do in New York City: Trying new food. NYC is so cultural, so trying different foods is one of my favorite things to do in the city. I also love attending social events and parties, so I could network and help build my empire.

What are you listening to at the current moment: Big Sean and Jhene Aiko (Twenty88), Kanye West and Travis Scott.

Favorite modeling experience so far: Being part of Kanye West’s Yeezy Season 3 show at Madison Square Garden. This was my favorite modeling experience because I had a lot of family and friends watching me and sending me pictures while I was still participating in the show. During that show, I also had the opportunity to hug Naomi Campbell and shake hands with Kanye West.

Which brand would you really love to model for: Alexander Wang

Any publications you would really love to be featured in: Vogue and Dazed Digital

Do you prefer print or runway modeling: Print because I love seeing myself on billboards and ad campaigns.

Place you would love to visit: Paris

What next for you: I’m currently working on getting a job in high end retail, working with my manager to find more modeling opportunities and working toward signing with an agency.